Ioannis Kapodistrias was born in Corfu on the 10th of February 1776; he studied in the monastery of saint Ioustini and learnt Latin, Italian and French. During the period 1795-1797, he studied medicine in the University of Padova. He made his first steps in politics early, in 1803 when he worked as Minister of Territorial Development of the Ioanian State. From 1815 to 1822 he worked as a Minister of Foreign Affairs of the Russian Empire.

On the 14th of April 1827, the national congress decided that he would be the first governor of Greece. As a governor, his task was challenging and complex, since he received an anarchic nation, which was trying, after 400 years of slavery, to stand on its feet as a commonwealth nation. So, he focused on the armed forces and tried to organize them under a united command. In addition he promoted significant reformations for the reinforcement of the state administration and the enactment of the legal framework of the state.

By undertaking the governance of the new nation, Kapodistrias first of all destroyed the Parliament and abolished the constitution. He replaced the parliament with the “Panellinion”, a body of 27 members, who did not have any power, and created a ministerial council under his leadership. He divided the nation in administrative regions and created also courts.

Ioannis Kapodistrias founded the National Mint and established the phoenix as the national currency and the National Stockbroker Bank. He built new schools, he founded the Church school in Poros, the Orphanage and the Archaeological Museum in Aigina, the Agricultural School in Tirintha, a Greek and French Print shop in Aigina, he rebuilt Mesologi and Patras, he granted loans to the islanders for the purchase of ships and the construction of shipyards in Poros and Nafplio. Along with Andreas Miaoulis, he tried to suppress piracy and quitclaimed the domain of the fleet to the government.

He founded the military school “Evelpidon”, aiming to organize the armed forces. Moreover, he continued the war against the Othoman Empire, because he feared that the English would limit the Greek boarders. He tried to agree on a loan from foreign banks, something which was against the English will. However, Russia and France decided to support financially Greece (the Tsar sent 3.750.000 French francs). It is worth mentioning that he dispensed all his fortune for national purposes and he refused to receive a salary.

Kapodistrias had a lot of enemies. Greece, because of its strategic position, was attractive for many countries which wanted to establish their domination over the Mediterranean Sea. England encouraged internal confrontations because they believed that Kapodistrias was a Russian ally. The fact that he didn’t give any power to the local authorities and he appointed his two brothers, Augoustinos and Viaros Kapodistria in key positions, led to a confrontation with the Kodjabashis and the ship owners. Hydra became the centre of the fight against Kapodistrias.

On the 9th of October 1831, in the morning, out of the church of Saint Spiridonas, Konstantinos and George Mauromihalis shot and stubbed fatally the governor Ioannis Kapodistrias, while he was going to attend the devotional. Konstantinos Mauromihalis was shot right away and the outraged crowd finished him and threw his body to the sea while his brother, George, resorted to the French embassy. However, he surrendered and was sentenced to execution.

His murder is attributed to a custom of Mani (a region of southern Peloponisos), called vendetta, and was provoked when Kapodistrias imprisoned Petrompei Mauromihali, because he had started a mutiny in Mani. However, nobody can claim for sure, if that was the reason behind the murder or it was undermined by foreign countries.

The dead body of Kapodistrias was transferred to Corfu, where it was buried. 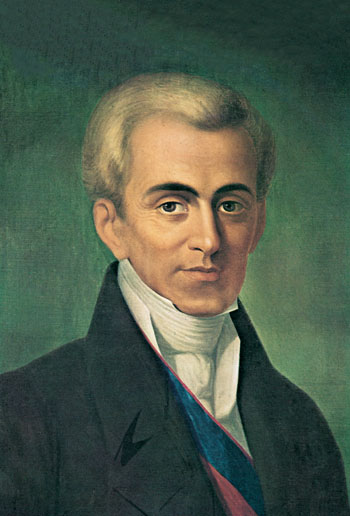 Did you know that?

The introduction of the potato cultivation is attributed to Ioannis Kapodistrias. An interesting thing is how he managed to attract people’s attention about potatoes. Initially, he introduced a load of potatoes and offered them to the people. However, nobody was interested in them.

Being aware of the Greek habits, he ordered that the whole shipment of the potatoes would unload publically, on the docks of Nauplio, but then they had to be carefully guarded. Soon, a lot of rumors spread. Since they were guarded so much, they had to be something of major importance. As a result some tried to steal them.

The guards had been ordered to allow that to happen and soon all the potatoes of the shipment were stolen. Kapodistrias plan to introduce potatoes in Greece had become a success.

Scroll back to top

DISCLAIMER – corfu-airport.com is not the official website of CORFU AIRPORT and is an independent guide to the airport.